Chat with us, powered by LiveChat
Categories
Home » Video » Thy Kingdom Come: The Future of Believers (DVD) (discontinued)

Thy Kingdom Come: The Future of Believers (DVD) (discontinued) 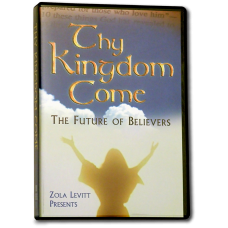 See the updated version of this product.

732 Overview
From a scenic park near Jerusalem, Zola gives us an overview of the series revealing our future according to Bible prophecy.
733 The Rapture
A graveyard on Mount Zion is the setting for Zola’s teaching on the “catching up” of believers, the first End Times event on the prophetic calendar. From the studio, Zola and Dr. Tom McCall talk about the amazing surprise and the timing of the Rapture of the Church.
734 The Judgment Seat of the Righteous
Among the ruins of ancient Caesarea is where Zola teaches on how believers are to be rewarded for the works we have done. We interview a Christian living in Israel, who is not working for temporal gain but is looking toward heavenly rewards.
735 The Wedding
At the beautiful rose garden next to the Knesset in Jerusalem, Zola teaches about the believers’ wedding to the Messiah and its Jewish context. We interview two Messianic believers as they show us their wedding ceremony and discuss its significance.

736 The Second Coming
There is no better place for Zola to teach about the return of the Lord than from the place from where He left, the Mount of Olives. Later, Zola and Dr. McCall exalt in the significance of the Messiah’s return.
737 The Throne of Judgment
From the Valley of Decision in Jerusalem, Zola teaches on the judgment of those who will live and die during the Great Tribulation. Today, the Christian Friends of Israel ministry blesses the brothers of the Messiah by helping Jewish immigrants as they return to the Promised Land.
738 The Kingdom Begins
Viewing the Temple Mount, Zola teaches on the beginning of the thousand-year reign of the Messiah on Earth. Zola and Dr. McCall talk about day-to-day life in the Messianic Kingdom.
739 The Kingdom in Progress
From the Mount of Olives, Zola explains how different it will be to live in the Millennial Kingdom. Today, Israeli-American citizen Reuben Prager of Jerusalem is looking to the future as he makes preparations for the next Temple.

740 The Gog & Magog Invasion
Zola reveals how at the end of the Millennial Kingdom, Satan is released one last time to do battle against the Lord. Avi Lipkin looks at the possibility of military invasion from a modern-day perspective.
741 The Great White Throne of Judgment
We see the wicked doomed to eternal separation from God as Zola teaches on this last and final judgment. Dr. Tom McCall offers a revealing examination of famous wicked people of generations past.
742 Eternity
Near David’s tower, Zola speaks of the new heaven, the new earth and the new Jerusalem. Zola and Dr. McCall discuss the delightful conditions for believers at our ultimate destination.
743 The Music
Combining new songs with significant melodies from the past, Zola presents the beautiful scenes of Israel that we have seen in the music videos featured in the programs of this series.

Glory: The Future of the Believers (booklet)
$4.00
Add to Cart