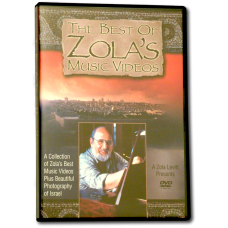 Zola’s Music Video I — 53 Minutes
The beautiful music of Zola Levitt Presents, with magnificent video footage from the Holy Land. Features excerpts from the albums Next year in Jerusalem; Messiah; Israel, My Love; and The Beginning of the End.
Zola’s Music Video II — 60 Minutes
A second collection of music from Zola Levitt Presents. Breathtaking scenes of the Holy Land accompanied by Zola’s original compositions from the albums Zola’s Songs by Lamb, Beloved Thief, Return to Galilee and Beyond Words. A fine marriage of music and video footage.

Zola’s Music Video III — 78 Minutes
This third collection of Zola’s Music includes beautiful scenes of Israel and Greece accompanied by selections from Living Waters, The Holy Land Today, Unto the Gentiles, and Israel: By Divine Right as presented on our television program.