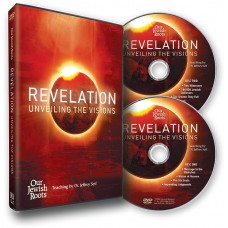 The last book of the Bible is filled with veiled visions that look toward the ragged edge of human history. Dr. Jeffrey Seif walks us through each of the 22 chapters which include glorious visions and angelic visitations along with darkness and judgment. Amidst the turbulence of trying times, this series encourages you to release your fear of the future and focus on God’s plan of salvation and ultimate restoration. These eight programs also include insights from David and Kirsten Hart and music by Zola Levitt.

2026 “Message to the Churches”
The Book of Revelation brings its readers a promise of blessing. In the first two chapters, Jesus appears to John as the great Judge and addresses the churches in Ephesus, Smyrna, Pergamos, and Thyatira.
2027 “Vision of Heaven”
Chapters 3, 4, and 5 reveal a rare bright spot in Revelation. The message to the seven churches also includes Sardis, Philadelphia, and Laodicea. A peek behind the veil gives a glimpse of God’s throne and Heaven with singing of praises to the Lamb.
2028 “The Six Seals”
Revelation takes a dark turn in chapters 6 and 7 as the first waves of judgment begin to pour on the Earth. The four horsemen of the Apocalypse bring pestilence, war, famine, and death. God’s servants from Israel and every nation received His seal.
2029 “Impending Judgments”
Chapters 8–10 show that the Word of God is both bitter and sweet. The Seven Trumpets herald judgment for those who refuse to turn from wickedness. Believers can call on Messiah to help them persevere through difficulties.
2030 “Two Witnesses”
In chapters 11–13, the sound of the seventh trumpet reveals the arrival of two witnesses. They bring the Gospel message during times of demonic-inspired misery as Satan and the antiChrist exert their evil rule.
2031 “144,000 Jewish Believers”
Chapters 14–16 begin with a song sung by the thousands who stand up and proclaim their love for the Lamb. John is able to get a glimpse of the heavenly Temple before the final seven bowls of God’s wrath are poured out upon the Earth.
2032 “The Greater They Fall”
Apostate Babylon sees its religious and commercial power destroyed in chapters 17–19. Messiah leads the armies of Heaven to victory in the Battle of Armageddon.
2033 “Ultimate Triumph”
The last three chapters of Revelation prophesy the Messiah reigning for 1,000 years before the Great White Throne Judgment. A new Heaven, new Earth, and New Jerusalem appear, wiping away every tear forever.