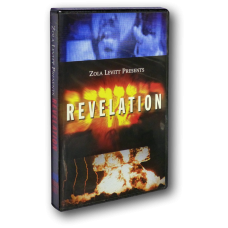 It grows more and more difficult to make programs on End Times prophecy. Events threaten to overtake the relatively slower speed of television production. This series will provide a real “revelation” to those who want to be informed about the onward march of Islam and the oncoming Tribulation Period.

900: Koran vs. Bible
Zola’s guest, Ibrahim Abdullah, shares his testimony as to how he left terrorism and Islam, becoming a Christian Believer who now defends Israel and the Jewish people. In an intensive period of soul searching, Ibrahim compared the Koran with the Bible, finding the ultimate truth he had been searching for in Jesus Christ and the Holy Scriptures.
901: On Pain of Death
Ibrahim Abdullah joins Zola once again and speaks of the growth of Islam in America. It should be remembered, he says, that Muslims cannot separate their culture from their religion. For a Muslim, becoming a Christian is a difficult step. In some countries, the penalty for doing so is death. Nevertheless, there are those who have boldly made the decision for Christ.
902: Born in Bethlehem
Walid Shoebat, a former Muslim terrorist who was born in Bethlehem, joins Zola in the studio. In this program, Walid shares what he believes to be a growing threat of radical Islam. He speaks of the prophetic Scripture, which warns of evil powers coming against Israel — a sure sign, he says, of the End Times.
903: A License to Kill
Our cameras go behind locked doors in an Israeli high-security prison to interview convicted terrorists. Watching the footage in the studio, Walid Shoebat provides commentary and rebuttal to the prisoners who claim they have every right to kill innocent Israelis who “occupy their land.”
904: 35 Life Sentences
We continue with our interviews in a high-security prison located in Beer Sheva, Israel. Walid Shoebat once again draws from his own background in refuting the claims of Hamas members. One of the convicted terrorists has been given 35 consecutive lifetime sentences for masterminding one of the most devastating suicide bombings in history.
905: Cowardice at Princeton
Ibrahim Abdullah speaks further of his own personal conversion from Islam. He tells of his recent efforts at Princeton University, where he and other former terrorists shared their views regarding the evils of jihad. In closing, Ibrahim addresses the End Times and contrasts the differences as seen by Muslims and by Christians.