Chat with us, powered by LiveChat
Categories
Home » Video » Holocaust 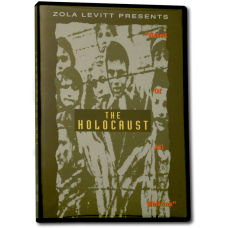 (6 programs on 2 DVDs) Interviews with survivors, rabbis, a former U.S. Ambassador, and a modern spy reporting on neo-Nazis emphasize the current importance of history’s most tragic event.

319 They Survived
Includes interviews with two Holocaust survivors, Dr. Eric Kulka and Efraim Zuroff. Dr. Tom McCall also interviews the head of research at the Israeli Museum of the Holocaust and the director of the Jerusalem Simon Wiesenthal Center.
320 An Eyewitness at Dachau
A visit to Dachau Concentration Camp, Munich. Includes interviews with Dachau survivor Bikolas Lehner and an American eyewitness who visited the camp just after the war in 1946.
321 A Spy Among Neo-Nazis
An interview in Israel with Yaron Svoray, investigative reporter/spy. He gives background regarding the motivations of his mission to go undercover for eight months among neo-Nazis in Germany.
322 Nazis Today
Zola continues his interview with Yaron Svoray. Yaron shows photos of neo-Nazis he took during his undercover mission — evidence which the German government has done nothing about.
323 Two Rabbis
Includes interviews with Rabbi Stan Eisenberg in Fort Worth and Rabbi David Rosen in Jerusalem. Two Rabbis in different hemispheres share a common concern for anti-Semitism.
324 Righteous Gentiles
Jeane Kirkpatrick, former U.S. Ambassador to the UN, shares her concern for political support by all democracies for the State of Israel. Pam Rosewell Moore, who was Corrie ten Boom’s companion and secretary, reveals some special insights into Corrie’s survival during the Holocaust.