Chat with us, powered by LiveChat
Categories
Home » Video » Special topics » Jehovah's Treasure — The Quest for the Ark of the Covenant and Temple Treasures 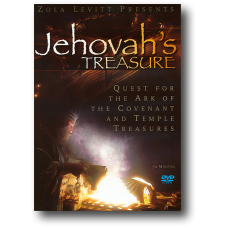 (70 minutes on 1 DVD) Five years in the making and narrated by David Dolan, a long-time friend of ZLM and former Jerusalem reporter for CBS, Jehovah’s Treasure uniquely documents the unearthing of two extraordinary tunnels in the Judean Desert. These tunnels were discovered after the Copper Scroll, one of the Dead Sea Scrolls, indicated that Temple treasures were buried all over Israel, some near the caves of Qumran where the Scrolls were discovered. Archaeologist Oren Gutfeld kindly permitted us to document three years of his excavations in tunnels that descend at a perfect 35 degrees for 425 feet—tunnels dating back to the First Temple Period. Nowhere else in all of Israel has anyone found tunnels like these.

Thus, with interviews and dramatic re-enactments, Jehovah’s Treasure presents the biblical account of the Ark and the Temple Treasures. At the same time, it uncovers the incredible mystery of tunnels that may lead to the very same treasures.

Is history finally about to unleash its most profound desert secrets? Will the Holy Treasures be revealed at the end of the Judean tunnels? Or will they remain a secret, buried deep within Jerusalem’s politically contested Temple Mount?