Chat with us, powered by LiveChat
Categories
Home » Video » Prophecy » Watch Therefore and Be Ready

Watch Therefore and Be Ready 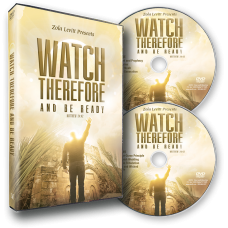 Watch Therefore and Be Ready encourages this generation to be aware of prophetic fulfillment, live expectantly, and be ready for Messiah’s return. David and Kirsten Hart present this eight-part series that features teaching from Dov Schwarz, guest analyst Dr. Mark Hitchcock, reports from Israel with Chaim Malespin, Hebrew lessons, and music written by Zola Levitt.

1803 “Covenant and Prophecy”
The foundation of faith is based on covenant. The New Covenant (Jeremiah 31:31) was made with Israel. The gentiles have been grafted into the olive tree.
1804 “Birth Pains”
In Isaiah 66 we see the Last Days labor pains of Israel that bring the Jewish people as a nation to “new birth.” In the birthing room, Yeshua — the Great Physician — attends Israel, whose labor pains shake the entire Earth.
1805 “Days of Noah”
The Days of Noah portend the appearance of Messiah Yeshua in the clouds to gather His people and set up His Kingdom on Earth. Three primary signs of Genesis 6 include global explosions of population, violence, and rampaging evil.
1806 “Fig Tree Generation”
Israel officially “put forth leaves” on May 14, 1948. Studying Father Abraham reveals what Yeshua meant when He told us about the final generation of this Age.
1807 “Curse-for-Curse Principle”
Genesis 12:3 promises both blessing and cursing in the covenant with Abraham and his descendants. Those who esteem you lightly will be obliterated.
1808 “The Jewish Wedding”
In Matthew 25:1–13, Messiah speaks in terms of Jewish wedding customs, including a midnight cry and marriage feast. He advises us to be like the five wise virgins, commanding that we “watch therefore and be ready.”
1809 “Refuge in Tribulation”
These events should remind us of a place that is prepared for the wrath of the Lamb, Messiah Yeshua. Yet even in this message, we see that His hand is outstretched in mercy.
1810 “Faithful and Wicked Servants”
Yeshua repeated the theme of faithful and wicked servants, especially in the signs of His coming in Matthew 24:45–51 and Mark 13:32–37. The faithful servant watches for the Master’s arrival while obeying His commands, but the wicked servant who watches not, becomes ungodly and faces eternal damnation.