Chat with us, powered by LiveChat
Categories
Home » Video » Prophecy » Daniel and the Last Days' Battle for Planet Earth

Daniel and the Last Days' Battle for Planet Earth 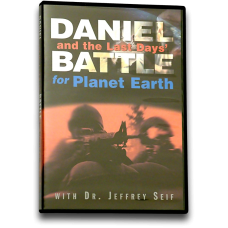 (8 programs on 2 DVDs) This engaging TV series compares today’s news to yesterday’s prophecies and shows that we are living in ominous times. Loaded with prophetic insights, drama, music, interviews, and more.

921: The Personal Battle
Focusing on Daniel’s personal faith and piety, rather than on any prophetic vision, underscores the importance of individuals being “ready” at day’s end. Before looking at what was on Daniel’s mind, viewers see first what was in his heart.
922: The Battle for Time
History is not spiraling out of control, but is moving in accordance with a predetermined plan—a message this segment forcefully underscores. Daniel’s prophecies mention Jesus’ first coming, His death, the destruction of Jerusalem, the re-gathering of Israel, the still-to-come Tribulation period, the Messiah’s second coming, and the final battle.
923: The Culture Battle
Those troubled by today’s headlines will appreciate Daniel’s ancient prophecies of a “Western” (Greek) culture squaring off against an “Eastern” (Persian) culture. These connections prove both interesting and alarming.
924: The Spiritual Battle
That we “wrestle not with flesh and blood” becomes apparent as we consider the emergence and naming of “archangels”—both Gabriel and Michael. Here we discuss the roles and functions of angels, particularly their service in helping Believers personally and Israel politically.

925: The Leader of the Evil Empire
Characteristics of the Antichrist’s person and administration are considered in this segment, along with a brief description of his limits and eventual demise.
926: The Battle Plan
This segment considers the antiChrist’s temporary dominion and his displacement when the Messiah eventually returns. Daniel notes the devil’s influence over the world, informing us that his day will come—at the end.
927: The Battle Royal, I
The dreaded “Battle of Armageddon” is explored as we examine Daniel’s prophetic assessment of the world’s final countdown and conflict.
928: The Battle Royal, II
Here we follow Christ’s triumphant entrance onto the stage of the human drama and witness the consequent displacement of wickedness. After we explore the prophetic words of John and Zechariah, viewers’ hearts will warm as we say, “He is coming soon—and we must be ready!”