Chat with us, powered by LiveChat
Categories
Home » Video » Musicals/music videos » Mine Eyes Have Seen — Zola's After Christmas Musical (DVD)

Mine Eyes Have Seen — Zola's After Christmas Musical (DVD) 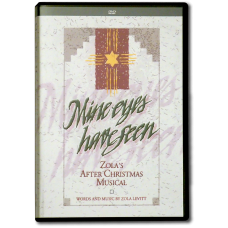 In this “after-Christmas musical,” Zola narrates the moving story of Simeon, the aged but faithful servant who waited to see the Messiah face-to-face. This beautifully staged, half-hour presentation will have you singing along with Simeon and Anna about the arrival of the King of kings, the Holy One of Israel.

And, behold, there was a man in Jerusalem, whose name was Simeon … and it was revealed unto him by the Holy Spirit that he should not see death before he had seen the Lord's Messiah (Luke 2:25-26).

In this musical presentation, Zola, our narrator, tells the story of Simeon, the first of all believers in the Messiah to wait to see Him face to face. This longsuffering servant finally did see Him when He was brought to the Temple in Jerusalem, hence, “Zola’s After Christmas Musical.”

It had been a long wait for the faithful Simeon, but finally he can sing, Mine Eyes Have Seen. Simeon and Anna had heard stories of the coming event. Imagine! Mary had actually been visited by an angel, and she questions the Lord with the moving entreaty Is It So?

Joseph, her husband, is given heavenly advice by an angel in a dream, who sings the spirited Joseph! Joseph! Mary praises the Lord in a magnificent poem known as the Magnificat.

In Bethlehem, everyone wants to know about the miraculous heavenly light that led the Wise Men to the Messiah. They ask, Did You See A Star? And Anna and Simeon rave all over Jerusalem about the Mechiah, that wonderful happening, that blessed event.

The Hebrew prophets told of the Messiah to come, the Holy One of Israel who would be born of a virgin. A chorus of townspeople sing Bethlehem, a stirring tribute to the little town in which He was born.

Simeon’s prayer to live to see the appearance of the Messiah had finally been answered. The entire company joins in singing the Finale, celebrating with Simeon and Anna the arrival of the King of Kings.

This beautifully staged half-hour oratorio will have you singing along with Simeon and Anna about the arrival of the King of Kings, the Holy One of Israel. Don’t be fooled by the title! This is magnificent music to be enjoyed throughout the year. Starring Zola’s first grandson as the infant Jesus!