Chat with us, powered by LiveChat
Categories
Home » Video » Israel » Pilgrim's Journey — An Armchair Tour of the Holy Land

Pilgrim's Journey — An Armchair Tour of the Holy Land 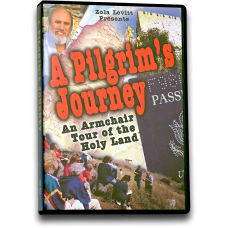 (9 programs on 3 DVDs) An armchair tour of the Holy Land. From Galilee to Jerusalem, this series explores the land of Israel from the perspective of a first-time visitor.

423 Beginning Our Exodus
As the journey begins, our pilgrims share feelings and expectations on going to the Holy Land. Our first day opens by crossing the Sea of Galilee. We view a first-century fishing vessel, and then travel on to the ancient city of Capernaum and the nearby Mount of our Lord’s great sermon. We continue by planting trees for the Kingdom, and end by visiting with the Jones family of Allen, Texas, who are first-time pilgrims.
424 In Galilee
We visit the church at the site of Mary’s Well in Nazareth. After descending to the beautiful Jezreel Valley, we view the ruins of Megiddo perched over the famous Valley of Armageddon. A spiritual high point is reached for many pilgrims during our baptismal service in the Jordan River. Our chief guide, Yossi Ashkenazi, then relates the dramatic history of a local kibbutz and directs us through the ancient Roman ruins of Beit Shean.
425 O Jerusalem
Our journey takes us south to a sycamore tree in Jericho, much like the one Zacchaeus climbed, and then on to the Church of the Nativity in Bethlehem, traditional site of our Lord’s birth. After shopping for souvenirs, we enter the Holy City of Jerusalem, where Zola speaks to our group at the Promenade overlooking the Old City.
426 His Last Days
Our pilgrims walk down the steep slope of the Mount of Olives to the traditional site where the Messiah wept over Jerusalem — the Garden of Gethsemane. After visiting the Mount of Olives cemetery, Zola and the group share a time of devotion and song in the Upper Room of the Last Supper. We are again favored with the impressions of the Jones family on their first tour of Israel.
427 Risen from the Dead
After beginning the day with praise and worship, we walk along a Roman street of Jesus’ time on our way to the Church of the Holy Sepulchre. Later at the Garden Tomb, Zola teaches on ancient Jewish wedding customs and their special significance to the Christian. We then listen in as worship leaders Harvey Schmitt and Charlynn Johns share their feelings about this pilgrimage to the Holy Land.
428 Masada and the Dead Sea
We head south to the ancient fortress of Masada where our chief guide, Yossi, explains its dramatic history. Zola recounts the finding of the Dead Sea Scrolls at the place of their discovery, Qumran. Also, the group enjoys a dip in the Dead Sea and hearing from an Israeli Army spokesman about current events in the Holy Land.
429 City of Gold
The tour explores the ancient past with guide Ian Stern, an Israeli archaeologist. The Jerusalem that was known to the Messiah is revealed as Zola and the group visit the model of Jerusalem from Jesus’ time. A modern-day perspective is presented by David Bar-Illan, an advisor to Prime Minister Netanyahu, as he discusses various issues he has encountered as Executive Editor of the Jerusalem Post.
430 Shalom, until the Kingdom
Our pilgrims visit Yad Vashem, Israel’s memorial to the Holocaust. As a bonus, we see the dress rehearsal of a new opera, David and Bathsheba, and learn Israeli folk dances. After we enjoy our final banquet, our guests, the Jones family, review the experiences and impressions of their first pilgrimage to the Holy Land.
431 Music for a Pilgrimage
Zola presents the beautiful music of A Pilgrim’s Journey: An Armchair Tour of the Holy Land, carefully blended with glorious scenes of the Land of the Messiah and special moments from the tour.