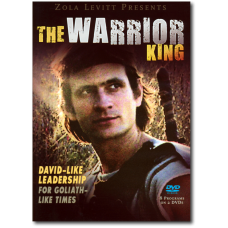 The Warrior King tells the story of King David’s time; but it is also the story of our own time. With challenges larger than Goliath all around us, we need Bible-based leaders now more than ever. In this eight-part series, Dr. Jeffrey Seif speaks to that need. Dramatic re-enactments — shot on location in Israel — complement the teachings in this series.

965: The Call
We consider how David captured the heart of Israel, his selection by Samuel, and the amazing battle with Goliath that catapulted him to renown.
966: David and Saul
Unfair trials often checker the road to success. We explore David’s abuse at the hands of King Saul, and his bond with the king’s son Jonathan. We evaluate Saul’s death and David’s gracious response.
967: Family
The Bible tells of the good,the bad,and the ugly. In this program we look at David’s marriage and family intrigue.
968: Wars
David was a warrior—a spiritual role model for us all! Philistine, Amalekite, and Ammonite wars are discussed, along with modern-day applications.

969: Celebrated Warrior King
Though anointed by God for kingship, David spent 13 years running from Israel’s first king before ascending to the throne himself. As we hear the story of David’s rise to power over all Israel, Jeff fleshes out its applications.
970: A Messianic Proto-type
The New Testament refers to Jesus as the “Son of David”—with good reason. We examine how the Old Testament predicted a coming Davidic Son.
971: Israel’s Sweet Psalmist
David’s gift for creating poetry and music shows that he was “in touch” with something beyond the state of his armies. Viewers will benefit from this program’s window into the softer side of the man.
972: Messiah
Messianic parallels abound in the person of David. In this closing program, we consider their various applications and implications. You’ll walk away saying “He lives!” and, we hope, believing that He lives in you.