Chat with us, powered by LiveChat
Categories
Home » Video » Bible characters » Esther: For Such a Time as This

Esther: For Such a Time as This 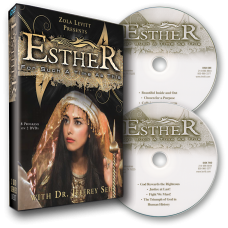 (8 programs on 2 DVDs) Like Esther herself, we Believers may be alive for such a time as this. Program titles include “Beautiful Inside and Out,” “Chosen for a Purpose,” and “Called to be Courageous.”

1010: Beautiful Inside and Out
Does God use women? Yes, He does! We begin by considering Esther’s rise and wicked Queen Vashti’s demise, and note how God elevates individuals to places of influence—then as now.
1011: Chosen for a Purpose
Though wickedness surfaces in various ways in every generation God positions His people to thwart the devil’s plans and fulfill His own. Here, we examine Mordecai and Esther’s placement—and our own; for we, too, are called to God’s work.
1012: Called to be Courageous
Faced with a plot to destroy the Jews, Esther wavers but decides her sacrifice is worth it, and says, “If I perish, I perish!” Would that we all had such resolve!
1013: Undone by a Woman
Unbeknownst to the scheming Haman, our story’s courageous heroine hatches her own plan to thwart him. The once-sheepish Esther stands up as a shepherdess. She boldly takes on the wolf, thus guiding the saga to its peaceful conclusion.

1014: God Rewards the Righteous
God enjoys using irony to give the wicked and the righteous their just deserts. While they are in progress, God’s ways are often mysterious to us, but we see the eventual triumph of the righteous—then as now.
1015: Justice at Last!
Our story’s villain comes to his inglorious end as he becomes the object of his own wicked scheme. Seeing the triumphal outcome of righteousness and faith will encourage us in our own lives.
1016: Fight We Must!
Even with Haman gone, the Jews still had to defend their homes and families. Such spirited self-defense is simply biblical.
1017: The Triumph of God in Human History
God turns our mourning into joy, as vividly demonstrated in this concluding program. The Jews are bidden to commemorate God’s saving power and goodness in an annual celebration, Purim. We should all celebrate God’s goodness, thereby banishing the passing clouds of pain and despair.