Chat with us, powered by LiveChat
Categories
Home » Video » Bible characters » Dark Prince: When The Devil Has His Day

Dark Prince: When The Devil Has His Day 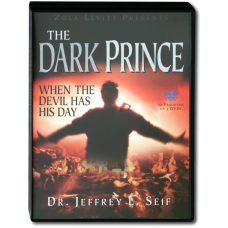 (10 programs on 3 DVDs) Take a behind-the-scenes look at Evil’s workings at the ragged edge of human history, and its ultimate uprooting when Christ returns.

973: Satan’s Rise and Demise in Genesis
Though Genesis talks about the dawn of Creation and the good Earth that followed, it focuses on how Creation strayed and who is responsible. This series opener discusses Satan’s emergence and God’s plan to crush him when Satan arises to rule the world at the dusk of human history.
974: Satan in Biblical History
This program pays attention to biblical history’s bookends: the paradise lost story in Genesis, and the paradise restored story in Revelation. The lessons illustrating Satan’s rise and demise should encourage people to position themselves on the right side of the battle line.
975: The Ruler of This World
We follow along as Isaiah describes the “ruler of this world,” Satan, through an actual ruler of the ancient world, and as Matthew relates how Satan once offered Jesus the kingdoms of this world. The temptations that the Lord avoided are ones that we should avoid, as well.
976: To Steal, Kill, and Destroy
Out of Daniel’s restless mind came images of unimaginable beasts that would wreak havoc upon a decaying world. Revelation uses the same images and picks up on the very same themes. This program examines these connections and their application to end-time Bible prophecy—and to today.

977: Deceit, Betrayal, and Coming Miseries
The devil’s principal tools—deceit and betrayal—were first noted in the Garden of Eden. We look at Jesus’ agony and betrayal—also in a garden—and the flurry of miseries that will be unleashed on this planet before the garden paradise is restored, as promised in Revelation.
978: Armageddon and the Final Conflict
Job’s miseries mirror the world’s in many ways, and result from Satan’s agitations. The Bible gives ample evidence that Satan attacks individuals, and Revelation describes how his assaults culminate in the Battle of Armageddon.
979: The Collapse of an Intoxicated World
The Bible informs readers that an intoxicated and disoriented last-days world will collapse and drown in its own vomit. Revelation tells this story, vividly relating how the world will lament the destruction of the evil prince of this world—a demise brought about by the Lord’s return.
980: The Second Coming!
We look at the long-anticipated return of Jesus and the consequent restoration of paradise.