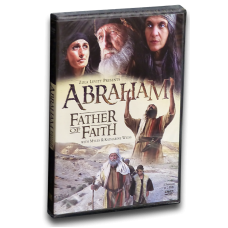 (8 programs on 2 DVDs) A lovely collection of programs that tell the patriarch’s story through drama at the actual locations in the Bible. Interviews with contemporary personalities illustrate the Jews’ seamless connection with the land promised to the descendants of Abraham and Isaac.

The Calling
God chooses Abram from the idol-worshipping world to walk with Him and proclaim His name through the Ages.
A Man of Altars
Abram walks the land, building altars in significant places. We interview the spokesman for Samaria, one of the modern disputed lands that God promised to the seed of Abram.
God-initiated Covenant
God makes a covenant with Abram. Myles interviews Itamar Marcus whose Palestinian Media Watch translates and analyzes the message in Arab-language media and schoolbooks.
A Domestic Conflict for the Ages
Sarai and Hagar fall out, but God makes a provision for Hagar and the sons of Ishmael.

The Promised Son
Isaac is prophesied; conflict separates Abraham and Lot. Katharine interviews Rachel Lipkin, an Egyptian-born Jewish interpreter of Arabic-language media.
Deliverance and Increase
Abraham and Sarah escape danger from Abimelech. Myles interviews Avi Lipkin, an expert on Islam and the Middle East.
Circumcision as a Forever Sign
God institutes this sign of the covenant with the descendants of Abraham. Former mayor of Shiloh David Rubin explains the contemporary conflict over the mountains of Israel.
The Sacrifice
Isaac, the promised son, is a picture of the Messiah to come. We interview a civic leader near the Tomb of the Patriarchs in Hebron, one of the most hotly contested cities of Israel.