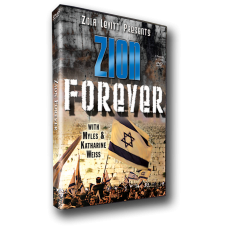 (9 programs on 2 DVDs) Look back at Israel’s history and forward into prophecy while remembering the Temple Mount’s present status. Zola’s music backs the teachings of Myles, Katharine, and Our Man in Haifa Eitan Shiskoff.

1. The Place
The Holy of Holies stood on a foundation stone called in Hebrew HaMakom (The Place). In exploring the ancient City of David we hear from knowledgeable guest, including archaeologist Eli Shukron and tour guide Hannah Ben Haim.
2. Western Wall
The Western Wall, once called “Wailing Wall’, now called HaKotel (The Wall), is the closest Jewish people can get to the site of the Holy of Holies. After Myles shows us a Bar Mitzvah celebration at the Wall, we hear how King David purchased the threshing floor atop Mount Zion. Guests include Hannah Ben Haim and Eitan Shishkoff.
3. Southern Steps
Myles and Katharine walk along the southern edge of the Temple Mount where Messiah and other worshipers would have entered. Archaeologist Dan Bahat tells us about the location. Eitan Shishkoff looks to a future time when knowledge of the Lord covers the Earth.
4. Kidron Valley
The Kidron Valley lies between the Temple Mount and the Mount of Olives. From the valley, Myles and Katharine give us the history of Jerusalem. Archaeologist Shimon Gibson speaks from the Golden (Eastern) Gate, where Messiah will enter when He comes again.
5. Valley of Elah
Young shepherd boy David slew the giant Philistine Goliath in the Valley of Elah. Here, Myles and Katharine recap the event. We discuss the walls of ancient Jebus (Jerusalem), the Gihon Spring where David’s forces invaded the city, and the tunnels at the southern end that may have provided the final resting place for Judean kings. Guests include Eli Shukron, Shimon Gibson and Shahar Shilo.
6. Ein Gedi
Myles and Katharine recount how David hid from King Saul in a cave near the spring at Ein Gedi oasis. Eli Shukron and Shahar Shilo tell about the discovery of the Pool of Siloam. Eitan reminds us that the current King of Israel is Yeshua Himself.
7. Temple Mount
The Temple Mount is at the heart of everything. We see thousands of artifacts from Bible times that have been discovered in the debris discarded over a decade ago from unauthorized excavations Guest include Shahar Shilo and Zachi Dvira.
8. Mount of Olives
From the Mount of Olives, Myles and Katharine look to the future of the Temple Mount, Archaeological finds continue to surface on Mount Zion, confirming Jewish heritage as recorded in the Bible. Guests include historian Shahar Shilo, archaeologists Eli Shukron and Shimon Gibson, and tour guide Hannah Ben Haim.
9. In the Meantime
Currently atop the Temple Mount sit the Dome of the Rock and Al Aqsa Mosque, neither of which shows any sign of moving. We hear the Moslem perspective from a representative of Jerusalem Islamic Waqf, which governs the area. We hear from David Parsons of the International Christian Embassy Jerusalem (ICEJ), Itamar Marcus of Palestinian Media Watch and a Jewish woman who is raising her family in the City of David.