Chat with us, powered by LiveChat
Categories
Home » Video » Whose Land Is It? (DVD) 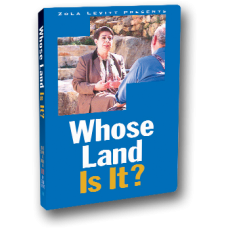 Whose Land Is It? (one 30-minute TV program)
Does Israel belong to the Jews, and if so, Who says so? In this 30-minute television program, Zola offers irrefutable reasons why only the Jews are the Holy Land’s rightful owners. He also defeats key arguments that attempt to undermine the Abrahamic Covenant, etc. Merely watching and reviewing this lesson will arm Believer and unbeliever alike to defend Israel’s right to its land.
The View from “Palestine” (two 30-minute TV programs)
What a blessing that such controversial programs weren’t censored by our more sensitive TV stations! Zola visited Ramallah and interviewed Hanan Ashrawi, considered by some to be the Darth Vader of Palestinian spokespeople. She eloquently articulated the Palestinians’ best arguments for being the true owners of Israel. Subsequent review sessions with two scholarly Arab Christians, journalist Joseph Farah and Professor Ergun Caner, unveil the fallacies in her assertions. This one-hour duo could be the ultimate crash course on credibly and diplomatically asserting Israel’s right to her land.

Whose Land Is It? (transcript and study booklet)
$7.00
Add to Cart
Zola Levitt Ministries Online Store © 2022