Chat with us, powered by LiveChat
Categories
Home » Video » Secrets of The Scrolls (DVD)

Secrets of The Scrolls (DVD) 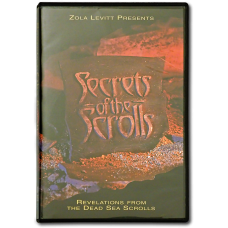 (7 programs on 2 DVDs) Coverage of the all-important unveiling of the Dead Sea Scrolls. Includes the TV Special.

Secrets of the Scrolls gives an historical account of these treasured manuscripts and presents some remarkable new revelations. The authors of the Scrolls were intensely Messianic and documented, it appears, the actual fulfillment of prophecy in the person of the Messiah. Such terms as “son of God,” “branch of David,” “stripes or piercings,” “being put to death” and “raising the dead” all ring a familiar chord. Quite possibly these incredible Scrolls represent the first extra-biblical revelation of Jesus Christ in history.

310: The Scrolls — A New Revelation
We quickly produced this program after the initial Associated Press news release. Zola quotes from it extensively and emphasizes its significance.
311: The Scrolls, Part 2
Within days of our first program’s broadcast, Dr. James Tabor phoned Zola to initiate a series of interviews that would unveil one of the 20th century’s most dramatic revelations. This program is the first of these interviews. A professor of Religious Studies at the University of North Carolina at Charlotte, Dr. Tabor delivers an incredible lesson.
312: The Scrolls, Part 3
During this interview, Dr. Tabor refers to several books about the Dead Sea Scrolls, including The Complete Dead Sea Scrolls in English by Vermes (Penguin Press), The Dead Sea Scriptures by Gaster (Anchor Doubleday), and A Facsimile Edition of the Dead Sea Scrolls (2 Volumes) by Robert Eisenman and James Robinson.
518: The Scrolls Special
This program consolidates the first three programs and delivers their powerful message in only thirty minutes. Later discoveries in Scrolls research inspired the three following programs.
239: The Wilderness Group
Michael Baigent, an English author, lectures in Qumran about the Scrolls. Dr. Tabor describes various approaches to excavation and how they pertain to the Scrolls. Dr. Robert Eisenman, a professor of Middle East religions at California State University at Long Beach, discusses the fascinating history of the Scrolls.
240: In Search of Answers
Dr. Eisenman discusses his quest to gain access to the Scrolls. Dr. Tabor describes his archaeological team and how they map the caves in Qumran.
241: Prof. Michael Wise
An in-depth interview with a professor of Aramaic, the language of Jesus. Prof. Wise, from the University of Chicago, helped translate the fragments when they were first released. The New Jerusalem text, telling how the future will be, is discussed enthusiastically.