Chat with us, powered by LiveChat
Categories
Home » Video » Sons of Israel 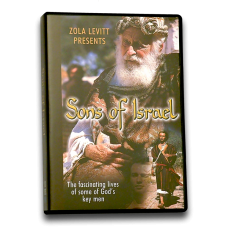 Nine 30-minute TV programs on 3 DVDs. Filmed on location where it happened in the Holy Land. Zola teaches on the fascinating lives of some of God's key men — from Abraham to the Messiah and the Apostles. An informative and stunningly beautiful history of the people God chose and the special men among them that He used for His purposes.

744 The Father of a Nation
From Mount Scopus in Jerusalem, Zola begins this series with the father of the nation, Abraham. This humble man from Ur relocated to a land he had never seen and received a promise to be a blessing to all people on earth. We find a school that teaches recent immigrants from the former Soviet Union about their Jewish history and culture.
745 The Blessing
From The Holy Land Experience theme park in Orlando, Zola presents Abraham's child of the promise, Isaac, and his son Jacob. We look at the lineage of these famous patriarchs and the impact of choice. Zola interviews Yitzhak Navon, former president of Israel and former personal secretary for David Ben Gurion.
746 Sons and Tribes
The twelve sons of Jacob formed a nation set apart from the world. Zola goes to the Upper Room where the Lord met with His twelve apostles who would change the nations of the world with the message. Anthropologist Nili Wazana discusses tribal culture and their historical context in ancient Israel.
747 Out of Exile
From The Holy Land Experience in Orlando, Zola teaches on Moses, the reluctant leader who set aside his place in Egypt's royal court to lead the Hebrews to the Promised Land. We interview former President of Israel Yitzhak Navon about his experiences and memories of David Ben Gurion.
748 A Nation Ruled
With the Knesset in the background, Zola chronicles the time of the Judges and how Israel needed a political system to keep order. Two experts discuss Theodore Herzl, the founders of the modern state of Israel and how Biblical mandates influenced its development.
749 A Desire to be Like Others
In view of David's Tower in Jerusalem, Zola teaches on Israel's desire for a human king which resulted in Saul, David and ultimately, Jesus. We interview Messianic Pastor Avi Misrachi on the day he invited an Arab Christian congregation to a joint worship service. These two groups are separated by politics yet united in Christ.
750 A Promise of What is to Come
From The Holy Land Experience in Orlando, Zola reviews how the prophets guided the people of Israel to become what God had called them to be. Archaeologist Steve Pfann explains how the law went from oral to written form at Qumran, the site of the Dead Sea Scrolls.
751 Free at Last!
Zola teaches on the Messiah, what Israel was looking for and why the majority of the Jewish people did not recognize Him when He came the first time. We also talk with Neil Cohen, the Vicar of Christ Church, about how far the church has come from its Jewish roots.
752 Unto All Nations
From the ruins of Emmaus, Zola chronicles how the gospel spread through Paul, Peter and the other apostles. From Abraham to Christ, the legacy of a nation and its people continues. Modern-day Jewish evangelist Yacov Damkani is hard at work spreading the Good News to modern Israel.