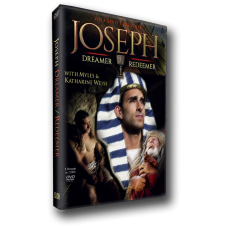 (9 programs on 2 DVDs) Biblical patriarch Joseph, from his humble beginnings to his ascendancy as a leader of the known world, presents a clear preview of the Redeemer. See Jesus revealed through a centuries-long gentile view.

Perhaps more than any of the patriarchs in the Bible, Joseph presents us with a clear preview of the Redeemer, Yeshua Ha Mashiach. From his humble beginnings to his ascendancy as a leader of the known world, Joseph pictures the One to come. Born to humble parents, Yeshua’s suffering and ultimate sacrifice as the Lamb of God will lead to His return as the Lion of Judah. In this nine-part series, we lay bare the “Egyptian” (foreign) identity and centuries-long gentile view of Jesus and reveal Him as the Jewish Messiah and Savior of the world.

Jealousy and Rejection
As we begin this nine-program series, we see Joseph tending sheep and wearing his coat of many colors. Jealousy and rejection from his brothers have already begun, but worsen after he tells them about his dreams. Myles and Katharine compare Joseph’s treatment by his family to Yeshua’s rejection by many in his day, though He was sent to be the Messiah. Ron Cantor talks about his book Identity Theft: The loss of Jewish identity.
Betrayal and Deception
Joseph’s murderous brothers throw him into a pit and then sell him as a slave. Father Jacob mourns the loss of his favorite son. Our Messiah was betrayed for money to those who wanted to kill him. While some still struggle coming to faith in Yeshua, Ron Cantor talks about the rise of Messianic Believers in Israel.
Innocence and Accusation
Joseph becomes a slave of the captain of Pharaoh’s guard. After a time of prosperity, false accusations condemn innocent Joseph. Yeshua lived a life without sin but suffered for the sins of the world. Eitan Shishkoff talks about the prophetic promise seen in the life of Joseph.
Faithfulness from Prison
While in prison for two years, Joseph patiently yet faithfully ministers to others, like Pharaoh’s butler and baker. During the Last Supper (Passover Seder), Yeshua points His followers beyond short-term difficulties and toward God’s glorious plans for them. Eitan Shishkoff reminds us that exile is not our—or Israel’s—final destination.
Prisoner to Prime Minister
After interpreting Pharaoh’s dreams, Joseph’s status moves from prisoner to the #2 position in Egypt. Yeshua’s sacrifice ushered in global salvation and the Holy Spirit. Rabbi Jeremy Gimpel reports on Voice of Israel radio.

Famine and Recognition
Famine leads Joseph’s brothers to Egypt for grain. Unrecognized, Joseph tests their hearts to see if they have truly changed. Israel's situation will change when they eventually recognize the Messiah, Yeshua.
Brother for Brother
Joseph’s brothers leave Simeon in Egypt as hostage until Benjamin comes. Joseph’s identity remains hidden to his brothers. The Messiah is currently hidden to most of His brothers, the Jewish people. Eitan Shishkoff reminds us that gentiles can be instrumental in end-times revival.
Longing and Revelation
At home, Jacob longs for the return of his sons; in Egypt, Joseph reveals himself to his brothers. Yeshua reveals Himself through the Scriptures, just as He did on the road to Emmaus. Eitan Shishkoff compares Joseph’s life to Israel’s history.
Substitution and Redemption
Because of the “stolen” chalice, Judah intercedes and offers himself in Benjamin’s place. Joseph reveals his identity and reunites the family. Though understood by few at the time, Yeshua was the Suffering Servant whose substitutionary death accomplished God’s plan for redeeming the world. Our Messiah will return, but this time as the reigning King.