Chat with us, powered by LiveChat
Categories
Home » Video » Gospel According to Isaiah

Gospel According to Isaiah 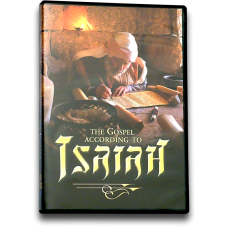 (8 programs on 2 DVDs) See why New Testament authors have quoted Isaiah more than any other Old Testament source and why Isaiah is often called the 5th Gospel.

910: Jesus’ Birth
Dr. Jeffrey Seif takes us through the drama of Jesus’ miraculous birth as described by Isaiah the prophet. Isaiah foretold that the Messiah would come as a “root out of dry ground” and that “His name shall be called Immanuel, meaning God with us.”
911: Jesus’ Rejection
“He was despised and rejected by men.” Jeff explains that the theme of rejecting God’s anointed is not new to Isaiah. On location at an ancient Jewish synagogue, we learn that the Messiah who was rejected shall one day be vindicated and that every knee shall bow to Him. Also, from our Prophesied Messiah television series, Zola teaches Jesus’ prophetic fulfillment of Isaiah 53.
912: Jesus’ Condemnation
Speaking from the Church of the Gallicantu, Jeff explores the story of Jesus’ arrest and condemnation by the Pharisees and Pilate. Believed to be the location of Caiaphas’ house, the Gallicantu is where Peter denied the Lord three times before the rooster crowed.
913: Jesus’ Death
How can a Jewish Messiah be “numbered with the transgressors?” Set within the backdrop of the Garden of Gethsemane, Jeff reports on Jesus’suffering and travail as foreseen by Isaiah to fulfill a final blood atonement for the entire world. This program offers a dramatic exploration into Jesus’ sacrifice for sins and a special moment with Zola, playing “For His Name’s Sake.”

914: Jesus’ Resurrection
The concept of resurrection from the dead did not originate in the New Testament. Jeff explains that Isaiah prophesied that Christ the Messiah would conquer death and the grave. Witness a celebration of Jesus’ miraculous fulfillment of prophecy at the Garden Tomb. In addition, Zola and Dr. Michael Wise discuss Messianic prophecy from the Dead Sea Scrolls.
915: Holy Spirit
Jesus told his disciples, “You are the light of the world.” From the Southern Steps of the Temple Mount, Jeff teaches the prophetic nature of the Holy Spirit as fulfilled by Jesus and spread unto all Believers like a fire from on high. Zola plays special music from our TV series Tell It On the Mountains.
916: Rebounding from Devastation
From the ancient ruins of a first-century estate, Jeff explores the prophetic position of Jesus as the Deliverer. At this location, we learn that God sent the Messiah to set the captives free and heal the brokenhearted. We also discover the Hebrew meaning behind the Lord’s Prayer, and enjoy an enlightening interview with Zola and Ra’anan Gissin, the former Chief Advisor to Ariel Sharon.
917: Summary
Atop the Mount of Olives, Jeff reviews the entirety of Isaiah’s prophecy concerning the Jewish Messiah’s birth, rejection, death, and resurrection. Nevertheless, Jesus’ active role in prophecy will not be completely fulfilled until He returns to Jerusalem one day to rule and reign for a thousand years.