Chat with us, powered by LiveChat
Categories
Home » Video » In The Footsteps of The Rabbi From Tarsus (DVD)

In The Footsteps of The Rabbi From Tarsus (DVD) 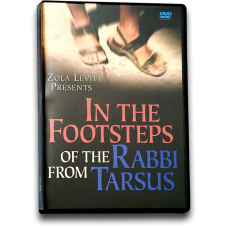 In this twelve-part TV series, Dr. Jeffrey Seif sheds light on the Apostle Paul, his movements, and his message. After examining Paul’s travels throughout the Roman Empire, Jeff analyzes Paul’s divinely inspired letters to early Church congregations, preserved in the New Testament. 12 programs on 3 DVDs.

945: First Steps Toward Christ
Paul’s “conversion” and subsequent ministry in Damascus/Arabia.
946: First “Official” Ministry Journey
Paul’s movements in Jerusalem, Tarsus, and Cilicia, and his “Famine Relief” visit to Jerusalem.
947: Apostolic Ordination and Subsequent Missionary Journey
Paul’s apostolic launch and follow-up trip to sort out the angst that developed in the wake of his message to non-Jews.
948: Second and Third Missionary Journeys
Continues with Paul’s missionary trips and ends with his apparently ill-fated trek to Jerusalem.

949: Arrest and Appeal to Rome for Trial
Paul’s arrest, his transport to a Caesarean prison, and his appeal to Rome where he is eventually sent for trial.
950: Roman Imprisonment, Release, Travels and Death
Shows Paul imprisoned in Rome, his release and further ministry, and his eventual execution in Rome.

The next six programs consider Paul’s divinely inspired Parchments in the order they were written—not from longest to shortest, which is how they appear in the New Testament.

In The Footsteps of The Rabbi From Tarsus (book) (out of print)
$14.00
Add to Cart
Zola Levitt Ministries Online Store © 2022