Chat with us, powered by LiveChat
Categories
Home » Video » Feast of Lights 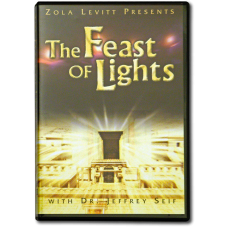 (3 programs on 1 DVD) Since the dawn of time, forces of darkness have amassed and threatened the Jews with extinction. However, in every generation, God provided a leader who would shine the Light of God’s faithfulness. Hanukkah—the Jewish Feast of Lights harks back to a time when a cruel, anti-Semitic dictator threatened to wipe out the Hebrews. But the Lord’s Deliverer arose, lit the lamp of hope, and saved Israel. From generation to generation, Jews have lit lamps in their homes to commemorate the victory and retell the story of the Feast of Lights.

918: “The Story of Hanukkah”
Dr. Jeffrey Seif sets up the story of Hanukkah and the abominable Antiochus Epiphanes; wherein, the Syrian dictator overthrew Jerusalem and desecrated the Holy Temple. Although many throughout history have sought to destroy God’s chosen people, Jeff reassures us that, “He who watches over Israel will neither slumber nor sleep.” Also, we learn about harvesting the olive and its importance to the golden Menorah, which resided in the Holy Place.
919: “‘You Are the Light of the World’”
Jesus told His disciples, “You are the light of the world.” Speaking from the Messianic synagogue Baruch HaShem, Jeff explains the significance of light to the celebration of Hanukkah as well as its prophetic type in Jesus Christ. Jeff interviews Rabbi Martin J. Waldman about the increase of Messianic Jews in the world today, and we see a timely interview with Zola and Messianic believer Simcha Davidov.
920: “The Feast of Dedication”
Jeff explores the prophetic fulfillment of Antiochus Epiphanes’ desecration, as written by the prophet Daniel, as well as the future Abomination of Desolation committed by the Antichrist. Discover the Feast of Dedication as observed by Jesus in the Bible, and don’t miss a heartfelt interview where Zola and Jean Rosenberg look at the celebration of Hanukkah in the home today.