Chat with us, powered by LiveChat
Categories
Home » Video » Faith of our Fathers

Faith of our Fathers 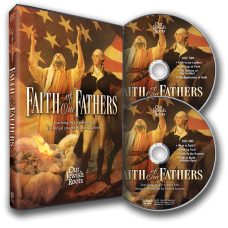 The Old Testament provides many examples of individuals whose faithful lives contributed to the building up of national Israel. Their actions inspired a future generation of dedicated people to begin carving out a modern yet Godly nation in the New World. In this series, Dr. Jeffrey Seif focuses on these people of faith. In addition, Christian historian David Barton presents original source documents, chronicling many of America’s Founding Fathers’ beliefs and efforts to anchor this nation to the moorings of belief in the God of Israel.

The Lord called many people in the Bible (like Abram, Noah, and David) to move toward a future that could not be seen. Trusting in the Word of God became the cornerstone for the creation of the Hebrew people and was valued by many of those who created a nation in the New World.

Times of testing prove that neither personal ambition nor comfort is a goal for a life of faith. Our examples are Noah, the ark builder, and Zerubbabel, rebuilder of the Temple. The Mayflower brought pilgrims like William Bradford who sought their own “promised land” in the New World. Despite challenging circumstances, they based their colony on a Biblical lifestyle.

Even though someone’s faith may be small, it can grow into something spectacular. Columbus, whose name Christopher means “Christ bearer,” heard the Holy Spirit speak and encourage his four voyages to the New World. Historical records reveal his devotion and desire to serve the Lord.

Biblical accounts of Israel becoming a nation in the Promised Land inspired America’s Founding Fathers in creating a new nation. They believed that the Bible was the Word of God and the ultimate source for establishing faith and righteousness.

Bible heroes like Ruth and David were not perfect. Rather, they succeeded by placing their hope and trust in God. Firsthand accounts and original source documents portray George Washington as a man of faith who experienced divine guidance and protection on multiple occasions.

Risk of loss often accompanies a faithful life, as exemplified by the Bible’s Esther and Mordecai. In forging America, people of faith petitioned Heaven during dangerous times. New Englander John Adams helped gather representatives of the thirteen colonies around a set of principles that would become the Declaration of Independence.

Actively living out faith can be counter cultural and sometimes requires boldness. The Bible chronicles Peter’s actions, like his attempt to walk on the water. Benjamin Franklin modernized the Lord’s Prayer for his personal use, promoted church attendance, and called the members of the Constitutional Convention to prayer.

Narratives about men and women of faith pervade the Holy Scriptures. The overwhelming majority Founding Fathers believed in the God of Israel in the Bible. Their deeds and writings testify to how they put their faith into action.