Chat with us, powered by LiveChat
Categories
Home » Video » Ezekiel and the MidEast "Piece" Process

Ezekiel and the MidEast "Piece" Process 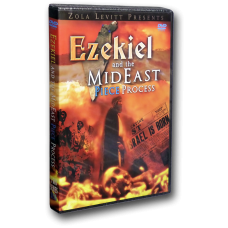 (8 programs, 2 DVDs) We delve into prophecies regarding Israel’s re-emergence as a nation-state at “day’s end.”

957: Ezekiel: The Man, His Time, His Message—Then and Now
His name means “God strengthens.” Reared as a priest in Jerusalem, Ezekiel finds himself among the exiles who are taken to Babylon. His encounter with God in a heavenly vision launches his prophetic message to a wayward people.
958: Overview—Destructive and Constructive Prophecy
A survey of the entire book of Ezekiel—judgment on Judah and the nations around it, Israel’s re-emergence, a climactic war, and a restored Temple—with emphasis on prophecy fulfillment today.
959: Judah’s Demise
This segment examines particular pieces of prophecy, noting Judah’s painful downfall, and God’s everlasting mercy even so through His promise to gather and rebuild Israel—something that is happening today.
960: Prophecies of Israel’s Last-Days Rise
A major piece in God’s prophetic, end-times puzzle consists of subsequent predictions of Israel’s last-days rise. A once-desolate land has become like Eden.

961: Israel’s Neighbor States
Israel will rally against its hostile neighbors; this part highlights Ezekiel’s predictions that larger regional forces will mobilize against Israel in a climactic war that they will lose.
962: The Valley of the Dry Bones
Israel’s re-emergence as a nation is dramatized through a startling vision of skeletons rising from their graves, forming a mighty nation. Independence Hall in Tel Aviv serves as the backdrop to a remarkable prophecy fulfilled in our generation.
963: The Battle of Gog and Magog
The nations surrounding Israel are bent on its destruction. Thousands of years ago, Ezekiel foretold an end-times war, but also predicted a miraculous Israelite triumph.
964: The Restored Temple
Ezekiel prophesied a restored Earth and a new Jerusalem Temple from which miraculous healing waters will spring forth. Ultimately, God’s ways are known on planet Earth.