Chat with us, powered by LiveChat
Categories
Home » Video » Eretz Israel (The Land of Israel)

Eretz Israel (The Land of Israel) 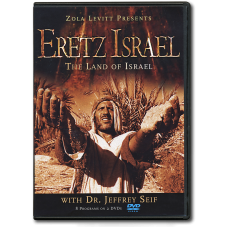 1101: The Land Promised
We visit Bethel and explore God’s promise to Abraham: that his and his children’s destinies are eternally bound in the Sacred Soil—what we appropriately call the “Promised Land.”
1102: Promised to the Next Generation
On location in Beersheba, we discuss how the God who cares for His people in every generation visited Isaac in Beersheba, and confirmed His unwavering intention to give the Land to Isaac and to his seed after him.
1103: To All Generations
Discover how Bethel became a “gate[way] to heaven” (Genesis 28:17), and learn of God’s affirmation to Jacob that the promises made to Abraham and Isaac would be fulfilled through him and his descendants.
1104: Entering the Promised Land
Though the Patriarchs were long dead by his time, Moses picked up and ran with their living Land promises. We visit Jericho and follow the story where the ancient Israelites began to contend for the destiny promised by God—their residency in the Land of Israel.

1105: Fighting for the Promised Land
The ageless mandate—to lay siege to the patriarchs’ promises—was passed on to Joshua. We examine the battle at Hazor that secured the northern territories for Abraham’s offspring.
1106: Promised Forever
At the Valley of Megiddo—Armageddon—we review God’s Land promises to David and Solomon and glance at clues that speak of victories yet to come.
1107: Jesus and the Promised Land
In the New Testament, we read of Jesus/Yeshua’s vision for the Chosen People and the Holy Land. It underscores the basis for this series: that the Land is forever significant; so is its possession by the Israelites.
1108: Israel Fulfilling Prophecy
Wrapping up the series, Jeff and David review the State of Israel, comment on its changing borders, and consider what’s ahead in the not-too-distant biblical timetable.