Chat with us, powered by LiveChat
Categories
Home » Video » Evidence of God 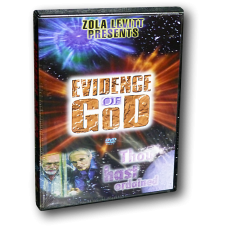 (8 programs on 2 DVDs) For anyone who wishes that the Bible and science could agree on our planet’s birth—both when it happened, and how long it took.

472 The Universe had a Beginning
Scientist Gerald Schroeder introduces his theory that equates generally accepted observations of science with the Creation account recorded in Genesis 1. While science sees the Big Bang as the beginning of the universe, the Bible records the event of creation as day one. Looking backwards, science sees fifteen billion years since the Big Bang. — From God’s perspective, this vast time period all happened within six 24-hour days.
473 Relatively Speaking
Gerald presents Zola with scientific evidence proving time is not a constant. Similar to how astronauts weigh less on the moon versus the earth, experiments have shown that atomic clocks actually go slower on high-speed aircraft. Since the universe is expanding, time can be perceived differently. The pattern of the universe’s exponential growth is evident in the spiral of a seashell, a sunflower and a galaxy.
474 Tuned for Life
Science observes that the universe has expanded a million million times. Dividing 15 billion (the number of years as observed by science) by a million million equals .015 years or approximately six days. The amount of complexity that went into the creation of the universe makes the chances of life virtually impossible without some external force providing order, namely a Creator.
475 Day One of Creation
Using the Hebrew translation, Gerald and Zola analyze the first day of the Creation account. Out of a chaotic system, humanity will come six days later. The ordering force is the Spirit of God. Physics has found that light can be trapped inside high temperature plasma, but as it cools, it separates from the darkness.

476 Days Two and Three of Creation
Gerald and Zola analyze the second and third days of creation. Genesis 1:6-13 reveals that a firmament was created, water was formed and then life began on earth. Science echoes this sequence of events and each one’s place in time, according to Gerald’s computations.
477 Day Four of Creation
As the earth cooled, the atmosphere changed from translucent to transparent so the heavenly bodies could be seen. The sun, moon and stars can now be seen, but how could this occur in day four? The words evening and morning in English when compared to their Hebrew roots, chaos and orderly, reveal the overall trend of creation. Random evolution is proved impossible.
478 Days Five and Six of Creation
The Bible mentions animal life for the first time in the fifth day of creation. Science reveals an explosion of life that fits in sequence and time placement with the Biblical narrative and Gerald’s computations. Science doesn’t have a clue as to what brought our universe into being, only that there was a creation. Even Charles Darwin refers to the Creator in his book, Origin of the Species.
479 Creation Reviewed
Zola reviews the content of the previous seven programs on Gerald Schroeder’s comparison between the observations of science and the creation account of Genesis 1. Science is not in conflict with the Bible. Technologically, we are only now coming to the point of finding out how true and accurate the Bible really is.