Chat with us, powered by LiveChat
Categories
Home » Video » Close Encounters with Yeshua 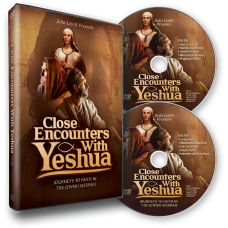 This ten-program series focuses on how Jesus/Yeshua supernaturally came and ministered on Earth, and today calls all mortals to draw near to Him. David and Kirsten Hart introduce each episode from the studio, while Myles and Katharine Weiss teach in Israel, using dramatic re-enactments and interviews with Believers about their journeys to faith in Yeshua, the Jewish Messiah.

God is Coming  Myles and Katharine recount how Abraham’s travels in the desert led him into dependence and relationship with his God. Interviews: Dean Bye, Director of Return Ministries; and Chaim Malespin, Director of the Aliyah Return Center in Tiberias, Israel.

Humble Beginnings  In a simple animal stall, Jesus (Yeshua) supernaturally came into the world as a baby, lived to fulfill the Law, and promised to return as the Lion of Judah. David and Kirsten provide the vocals for “Yeshua,” a song written by Zola Levitt.

Jewish Context  As a boy, Yeshua came to the Temple to offer sacrifices. Later, He became the sacrifice, the Lamb of God. Interview: Karen Davis, Worship Director of Kehilat HaCarmel.

Miraculous Ministry  Near the Sea of Galilee, Yeshua performed many signs and wonders that amazed many but disturbed others. Interview: Eric and Terri Morey, founders of The Galilee Experience.

Prophecy Fulfilled  At a first-century synagogue at Magdala, likely visited by Yeshua Himself, Myles and Katharine remind us that Scripture is reliable. Interview: Pastor Juan Maria Solana, Director of Notre Dame of Jerusalem Center (Catholic) and founder of the Magdala Center.

Living Water  The Pool of Siloam was a place to perform cleansing rituals; there, Yeshua performed a miracle that proved He was a prophet, priest, and the King we await. Interview: Arab Pastor Vincent Shammas (Seeds of Better Life Center in East Jerusalem).

Mountaintop Experience  On the Mount of Transfiguration, God honored His Son. Yeshua gave authoritity to His Disciples and sent them out. Interview: Chaim Singerman of Jerusalem Hills Inn in Abu Ghosh.

Life Laid Down  Yeshua came down the Mount of Olives like a king; but in the Garden of Gethsemane, He surrendered His will for the Father’s plan. Interview: Carolyn Hyde, Heart of G-d Ministries.

Empty Tomb  Myles and Katharine remind us that the Crucifixion and the Cross led to the empty tomb, and thus removed the curse on mankind. Interview: Samuel Smadja, leader of Messianic Assembly in Jerusalem and owner of Sar-El Tours.

Interview with Gary Bayer  Gary Bayer explains his battle with cancer and how Yeshua comforted him, becoming even more real and personal. Interview: Gary Bayer (PlaceOfStoriesIsrael.org), a writer and television “presenter.”