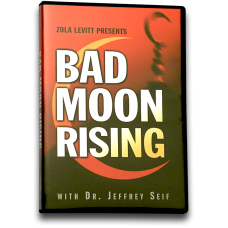 (8 programs on 2 DVDs) Dr. Jeffrey Seif remembers yesterday’s Holocaust and considers anti-Semitism’s rise in modern-day Europe. Though dressed this time in Islamic garb and not in Nazi uniforms, anti-Semitism is making fresh headway in the world, its current surge fueled by the radical Islamic fringe as it turns out the lights of once-Christian Europe. Jeff speaks out against this trend with a prophetic voice and calls individuals, particularly Europeans and onlooking North Americans, to resist the encroaching darkness and walk in the light of God’s grace and love.

937: When Darkness Once Prevailed
Dr. Jeffrey Seif speaks from a Jewish synagogue/memorial in Dachau, where he draws troubling parallels between the rise of the Nazis and the rise of radical Islam.
938: Out of the Darkness
Against the backdrop of Dachau’s front gate, emblazoned with the lie “Work Will Make You Free,” Jeff teaches about real freedom. A Holocaust survivor shares her remarkable story.
939: Dark Night of the Soul
Jeff speaks from inside the barracks of Dachau. Sandra Levitt and Will King interview survivors who worked on the bunker where Hitler planned to manufacture his Messerschmitt aircraft.
940: Bright Lights in a Darkened World
“March of Life” participants express support for the Jewish people and the need to “lift the veil of silence.” Jeff speaks from the Dachau crematorium about the Jews who were shoved into ovens.

941: The Darkness That Nearly Engulfed Us
Jeff teaches from the German site where Hitler nearly succeeded in developing an atomic bomb. Zola interviews Dr. Ergun Caner, an Arab-Christian who shares his insights on Islam.
942: Letting the Sun Shine
Jeff teaches from the site of Hitler’s atomic reactor, admonishing the viewer to draw a line in the sand. We are warned that the greatest tragedy would be to think that such things can’t happen again.
943: A Star That Breaks Through the Darkness
Sandra and Jeff interview Brigitte Gabriel, formerly of Lebanon, who has appeared on many network TV shows sounding an alarm about the evils of radical Islam.
944: Heavenly Light From Hellish Darkness
Walid Shoebat shares insights regarding Islam from his book Why We Want To Kill You. Zola interviews Caecelie Rexin, who concludes—referring to the Holocaust—“Never again.”