Chat with us, powered by LiveChat
Categories
Home » Books » Mountains of Israel 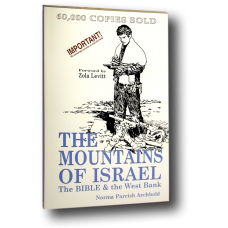 As Zola’s guest on TV, Archbold presents a refreshing perspective on the Arab-Israeli conflict, especially for those who have studied Israel from a Scriptural view. Enlightening maps, illustrations, charts, and references provide a geographical orientation to the war game of all eternity.

Readers will find eye-opening quotes from witnesses who were in the Holy Land during the 18th and 19th centuries. Their descriptions characterize Israel as a treeless, barren wasteland before the Jewish people’s return. Equally helpful to gentiles and Jews, Mountains remains valuable reading since it is presented from a Biblical point of view — God’s Word and His plan, of course, remain unchanged.