Chat with us, powered by LiveChat
Categories
Home » Temple 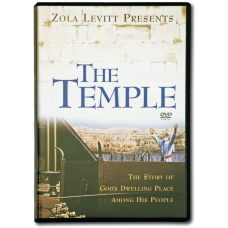 V172 The Tabernacle, Part I
God’s instructions to Moses on Mount Sinai: “And let them make me a sanctuary; that I may dwell among them” (Exodus 25:8).
V173 The Tabernacle, Part II
The sojourn in the wilderness, with the Israelites carrying the Tabernacle toward the Promised Land and finally placing it at Shiloh.
V174 Solomon’s Temple
The story of the construction of the largest temple ever built by human hands; a wonder of the ancient world that impressed the Queen of Sheba!
V175 Herod’s Temple, Part I
The House of God in Jerusalem at the time of Messiah; its construction and its grandeur. The Roman world and 1st-century pilgrimage are explained in this Gospel-centered program.
V176 Herod’s Temple, Part II
The great days of the second Temple and its disastrous destruction, as prophesied by the Messiah.
V177 The Tribulation Temple
The Temple of the future, the blasphemy of the Antichrist and the return of the King to reign on Mount Moriah.