Chat with us, powered by LiveChat
Categories
Home » Psalms of Ascent 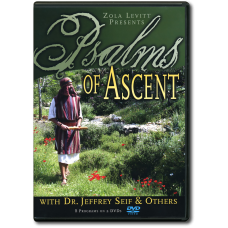 (8 programs on 2 DVDs) Jeff and Sandra examine Psalms 120 to 134, which are known as the “Psalms of Ascent.” While these psalms may have been sung by ancient Jews going up to the Temple in Jerusalem, they are surprisingly appropriate and timely for Believers today. Eitan Shishkoff from Haifa and the music of Marty Goetz are also featured.

Psalms 120 & 121
From the UN headquarters in Jerusalem and nearby Ein Prat, Jeff reminds us that King David had to deal with deceitful enemies and times of distress but realized that his sure source of help was the Lord.
Psalms 122 & 123
A mantra of this ministry is “Pray for the Peace of Jerusalem” from Psalm 122. This city has had its share of battles, yet it is still central in the hearts of Jews and Christians as we look to the Lord for mercy and ultimate deliverance.
Psalms 124 & 125
Even though Israel’s opponents have been many and fearsome, the Lord has sustained Israel these many centuries. King David saw divine protection and likened it to the mountains that surround Jerusalem.
Psalms 126 & 127
Out of captivity and sorrow, the Lord brings joy through deliverance. The Israelites have returned to the Promised Land. From the Southern Wall of the Temple Mount, Jeff reminds us that human efforts to build are in vain without the Lord’s protection.

Psalms 128 & 129
At the Mount of Olives in Jerusalem, Jeff considers the Psalms’ clear teaching that fear of the Lord and honoring His ways bring blessings to individuals and families. Israel as a nation has seen much affliction, but the Lord’s support is unwavering.
Psalms 130 & 131
At the Western Wall, Jeff speaks of God’s ears that are open to our cries for help. Always there, He faithfully pours out His forgiveness and redemption. The God of Israel provides contentment to our souls like a mother comforts her child. Eitan Shishkoff reminds us of our need to pray for an awakening among His People.
Psalms 132 & 133
David wanted to build a temple in Jerusalem because he knew the Lord had chosen it. Zion became His abiding place and remains His to this very day, despite replacement theology. In this fractious world, dwelling together in unity is a blessing.
Psalms 134
Sandra and Jeff conclude this series having seen many coming up to Jerusalem, seeking and praising God. On the Mount of Olives, Jeff invites all Believers to journey together to our ultimate destination. Marty Goetz sings a wonderful rendition of “Benediction.”