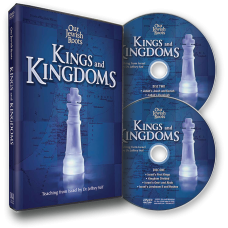 0 reviews  |  Write a review
Share
Description Specification Reviews (0)
Dr. Jeffrey Seif teaches from the Books of 1 and 2 Kings. He examines the rulers of ancient Israel and Judah, who reveal lessons in Godly leadership. David and Kirsten Hart discuss their applications for today. Throughout this eight-part series, we hear Israeli perspectives on the kings, and Sarah Liberman teaches Hebrew words for worship.

“Israel’s First Kings”
On the Mount of Olives, Dr. Seif discusses the reason and roles of the first two kings of Israel — Saul and David — as well as the expectations placed on them. Those in leadership — in fact, all Believers — face a constant temptation to drift away from Biblical values.
“Kingdom Divided”
Solomon, the wisest man, made foolish mistakes by letting in outside influences and allowing his heart to drift away from the Lord. His son Rehoboam drifted much farther. His oppressive policies caused Jeroboam to lead 10 of the 12 tribes in rebellion, creating the northern Kingdom of Israel. The two tribes that remained — Judah and Benjamin — formed the southern Kingdom of Judah.
“Israel’s Omri and Ahab”
Illustrating how bad people can come to power in misguided ways, Omri seized the throne of Israel by mutiny. Deterioration continued when his heir Ahab (the worst king ever) not only turned away from God but actively opposed Him.
“Israel’s Jereboam II and Hoshea”
Even though King Jeroboam II was evil, he was praised for securing Israel’s border. Leaders should be trustworthy, not bloodthirsty. Israel’s King Hoshea reaped what he sowed and, unfortunately, so did Israel at the hands of the Assyrians.
“Judah’s Joash and Uzziah”
Young leaders need wisdom and guidance from advisers who are tethered to God’s Word. As time went by, King Joash’s zeal for the Lord faded as he became prideful. King Uzziah was a young man when he ascended the throne, but he became so obsessed with power, the Lord smote him with leprosy.
“Judah’s Hezekiah and Manasseh”
Good King Hezekiah did not depart from following God and His commandments. Faithfulness pays dividends! Unfortunately, Hezekiah’s son Manasseh brought Judah horror and bloodshed for the five decades of his rule.
“Judah’s Josiah and Zedekiah”
King Josiah rediscovered God’s Word and took it seriously. Oh, that our leaders would do the same! Poor leadership leads to bad consequences. Josiah’s son Zedekiah rebelled against the Lord, paving Judah’s road to ruin.
“Israel’s Future King”
Under the Mount of Olives, Jeff visits the tombs of the prophets Zechariah, Malachi, and Haggai. The prophet Isaiah looked to a reunited Israel’s ultimate King, who is called “Mighty God” and “Prince of Peace.” This is the Lord Yeshua, who will return to rule and reign from David’s throne.