Chat with us, powered by LiveChat
Categories
Home » Jeremiah: Hope Over the Horizon

Jeremiah: Hope Over the Horizon 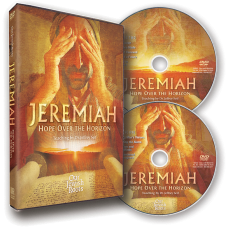 Known as the weeping prophet, Jeremiah received the assignment of warning his countrymen of the coming judgment and deportation at the hands of the Babylonians. A message of hope and deliverance is woven through Jeremiah’s writings.

2209 Young Man’s Visions
The Babylonian war machine was coming to Judah. The Lord chose a young Jeremiah to be His prophet and to deliver the call to return to the ways and values specified in God’s Word. Their culture, like ours, veered off the path and was about to reap the consequences.
2210 Sounding the Alarm
Idolatry was rampant, so the God of Israel promised destruction for the people of Judah who were living in sin. Jeremiah sounded the alarm, but no one listened. Likewise, many of those living around us today refuse to admit their sin or turn to the Lord.
2211 Corruption and Closed Minds
Lies and greed corrupted Judah’s leaders, much to Jeremiah’s dismay. He wept when they believed false promises of peace and rejected God’s justice, righteousness, and truth.
2212 Faith Abandoned and Reimagined
Jeremiah’s message to repent went unheeded. Consequently, judgment came to those who had abandoned the Lord. Jeremiah took comfort in knowing that following destruction, restoration would come through the New Covenant.
2213 No Escape
Jeremiah relentlessly proclaimed God’s message. The Babylonians were coming to destroy Judah and deport its citizens. They relied on political alliances for their security. The Lord, however, had withdrawn His protection, so catastrophe was inevitable.
2214 Promises Made
Brighter days were coming when Judah’s iniquity would be forgiven. God would save His people from captivity and return them to the Promised Land. He promised to write His Law on their hearts and remember their sins no more.
2215 Ruin and Renewal
Speaking the truth can bring trouble from those who don’t want to hear it. Jeremiah experienced persecution, yet he loved the people, and his heart broke to see sin’s devastating effects. The same God who brought ruin would also bring renewal, through Yeshua the Messiah.
2216 Hope and a Future
Jeremiah records God’s promise to deliver them out of captivity after 70 years. Later, the Lord will cause a branch to come of out David that will bring justice and righteousness to the Earth. All people in Messiah are grafted into this tree.
2217 Jeremiah in Retrospect
This final program in our series features an interview with author and radio host Dr. Michael Brown. From the studio, Dr. Seif discusses the applications and takeaways from the life and writings of Jeremiah with David and Kirsten Hart.