Divine Deliverance: from Avraham to Yeshua 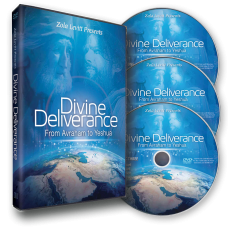 Twleve 30-minute programs on 3 DVD. In this series, we examine how the Lord offered a message of deliverance through 12 significant Bible characters, beginning with faithful Abraham and culminating with Messiah Himself. Dr. Jeffrey Seif teaches on location in Israel and discusses the lesson’s application with David and Kirsten Hart in the studio. We enjoy enlightening dramatic re-enactments from past series, along with Zola’s music, completely re-orchestrated and sung by David and Kirsten.

1906 “Abraham”
A journey into an unforeseen future began with a step of faith toward a promised land. The God of Israel still leads those who follow Him, oftentimes through barren places. He shows His power in weakness.
1907 “Isaac”
The promise of a child to an elderly couple came in an angelic message. Father Abraham’s willingness to sacrifice his only son, Isaac, involved an act of obedience by each of them. Their successful test of faith pictures the redemption to come.
1908 “Jacob”
Family dysfunction followed the birth of twin boys. The younger held tightly as he wrestled with the angel, wanting a blessing. Yet the best news of all time, the good news of salvation, came through this man who became “Israel.”
1909 “Joseph”
Israel’s sons experienced tension and betrayal before receiving redemption and deliverance from famine and drought. It is important that all people discover their Deliverer.
1910 “Moses”
At age 80, Moses heard the call of God to deliver His people out of Egypt. At that time, these former slaves gained access to the God of Heaven through His Holy Sanctuary. Today, Believers also have access to atonement and mercy. Deliverance is only a prayer away.
1911 “Ruth”
The loyalty of a young Moabite widow to her mother-in-law results in their deliverance from deprivation and in hope for the future as Ruth joins Messiah’s lineage.
1912 “David”
The young shepherd boy had great confidence in his God. Anointed by the prophet Samuel, David became king of Israel and the ancestor of the King of kings.
1913 “Isaiah”
“He was despised… by His stripes we are healed … all we like sheep have gone astray” (Isaiah 53:3, 5, 6). The most quoted prophet of the Old Testament, Isaiah’s writings point many to the deliverance found only in Yeshua/Jesus.
1914 “Ezekiel”
This exiled prophet saw dramatic visions of transformation: dry bones into living people, and water flowing from the dry mountaintop. God’s grace and mercy fills people with a new Spirit and new life.
1915 “Daniel”
Even in the exile, Daniel kept his focus on the Lord, praying habitually. He saw events of the Last Days still to come. In these difficult times, we too should employ the powerful weapon of prayer.
1916 “Esther”
Winning a beauty contest positioned her to avert a pogrom to wipe out the Jewish people. God raises up people like Esther in each generation to deliver His people, culminating in the greatest redemption: through Yeshua.
1917 “Jesus”
On His last night, Messiah said that He wanted to be remembered by a Passover meal. He is the door, the light of the world, and the ultimate Provider of deliverance. We pray that you have experienced deliverance and follow Him.