Chat with us, powered by LiveChat
Categories
Home » Age of Terror 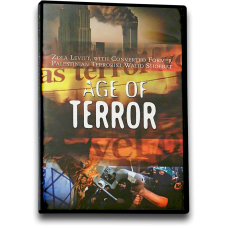 (8 programs on 2 DVDs) Walid Shoebat, an ex-Muslim terrorist who was born in Bethlehem, joins Zola and provides insights into the world of terrorism sounding a clear trumpet of warning concerning the days ahead.

772: The Assault on Israel
Visiting Dor on Israel’s coast, Zola paints a picture of Israel’s ancient enemies, the Phoenicians and Philistines. He highlights the many assaults from foreign powers against God’s chosen nation and suggests that the coming Antichrist may be of Greco-Syrian heritage.
773: History of the Mount
Atop the Mount of Olives, Zola presents the fascinating history of the Temple Mount, the place that saw God save Isaac from sacrifice, that saw temples raise and temples destroyed, and where restored Israel looks forward to a final temple that will herald Messiah’s return.
774: Rewriting History
At the Southern Steps of the Temple Mount, Zola presents the history of the area and the current efforts by the Muslims to expand their place of worship within the Mount, excavations that have led to bulges and a weakness within the supporting Temple Mount walls.
775: Mark of the Beast
From the Mount of Olives, Zola pictures the Antichrist entering the future temple and claiming to be God. Antiochus, A Syrian king who violated the Holy of Holies and defiled the temple with unclean sacrifice, was a forerunner of the Antichrist.
776: Battle of the Gods
On location at the Dor Museum, Zola talks about the Phoenicians and Philistines who settle in the area thousands of years ago, bringing their false gods with them. Elijah challenged the priests of Baal, and with fire from heaven, the God of Israel proved that He alone is God.
777: A Cup of Trembling
Stationed at a strategic position overlooking Jerusalem, Zola outlines the three key attacks this city has experienced since Israel became a state in 1948. Armageddon is next, and again the might of the world will not prevail.
778: Siege of the Holy Temple
At the Diaspora Museum in Tel Aviv, Zola reviews the history of the Jewish temples, from Solomon’s to Herod’s. The Roman siege of 70AD, depicted behind Zola, is symbolic of the many empires that have come against God’s holy place.
779: When Good Is Called Evil
From Tel Aviv, Zola reminds the viewer that Israel is a safe, thriving country. Despite the media’s efforts to portray it as a battleground, this little nation is a secure, efficient democracy in which deserts bloom and God’s Chosen People await His coming.